The vegan musician frequently uses her platform to educate fans about the benefits, both personal and planetary, of plant-based eating.

Now, Eilish has taken her campaign one step further by endorsing the month-long challenge that asks people to try plant-based eating for 31 days. In her story, she shared a Veganuary-branded black and white image of herself. Accompanying the picture was the quote: “By replacing meat consumption with plant-based foods, together, we can give the Earth a fighting chance.”

Registration for Veganuary 2023 sign-ups opened on December 18, 2022, with Eilish’s story being posted a week later.

Promoting Veganuary is just the latest way that Eilish has used her celebrity status to educate about the climate crisis.

As part of her Happier Than Ever tour in 2022, Eilish played six shows at the O2 Arena in London. On the days of her performances, no animal products were served anywhere in the venue. Additionally, a climate awareness exhibition was hosted, called Overheated Live.

Concertgoers were encouraged to attend the climate event, which included activist speakers and key information about how a switch to a plant-based food system would benefit the environment.

Plant Based News co-founder Robbie Lockie hosted a panel at the event, which focused on the importance of evolving our food system. They spoke with Support + Feed founder Maggie Baird (who is also Eilish’s mom), as well as Isaias Hernandez, the founder of Queer Brown Vegan.

More recently, Eilish also lent her support to the Climate-Friendly School Food Program campaign, launched by Friends of the Earth.

A milestone for Veganuary

Veganuary was first launched in 2014, and has since then soared in popularity.

Last year saw 629,000 participants take part, and 2023 is set to be its biggest yet. The charity recently announced that one person is signing up every 2.4 seconds.

Alongside Eilish, a slew of high-profile promoters have endorsed Veganuary, including Joaquin Phoenix, Sir Paul McCartney, and Alicia Silverstone.

It’s not too late to sign up – take the Veganuary challenge here.

Well done to Billie Eilish. Young and influential people like her give me hope when I am really struggling to comprehend the immense cruelty, pain and suffering that so very many farm animals endure for their whole lives. The feeling of helplessness is overwhelming. Thank you to everybody who is vegan!!!!

Remodeling $700 a day with my cell phone part-time. Now I’ve gotten my fifth payslip for $19,632 and every one I’ve created has ended up duplicating and pasting images online. edc.280 This house painting makes yankee kingdom ready to make extra cash daily for clear aiming and jobs and also the standard earnings
are just awesome… http://aboutwork11.blogspot.com

The planet will always have a fighting chance–not so the 70 BILLION animals exploited for meat, dairy, eggs and sea life! They deserve center stage! It’s their planet, too, and they’re not the ones responsible for the planetary crisis–HUMANS ARE! Most humans which “go vegan” for “the environment” or for health reasons fail to stay committed, while many, if not most, who go vegan for the animals, for ethical reasons, who refuse to partake of an immoral and violent system of “food” production–usually DO stay committed! I was vegetarian since 1974 FOR THE ANIMALS, and vegan since 2001. And I’m 77 years old! 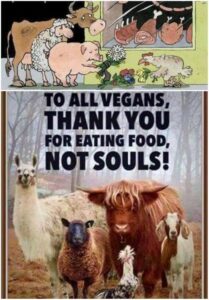 yes to plant based diet, no to boring sold out pig eilish

So wen dont wanna hurt animals but love hurting plants? Thats plant abuse! Plants feel just like animals so why not eat nothing?

There’s a whopping difference between sentient life and insentient life. You already know this– in a sudden flaming housefire, would you rush to first remove your pets or your houseplants?? Your pets are fully feeling sentient beings with intact nervous systems. Your plants are not.
I rest my case.

Wooooooow…. we love you

wpDiscuz
7
0
Would love your thoughts, please comment.x
()
x
| Reply
You are going to send email to