Factory farms require tens of thousands of gallons of water to flush feces and urine from floors multiple times a day. This is because, in the US alone, farm animals produce around 885 billion tonnes of manure each year.

All of this waste goes to “manure lagoons,” which emit methane and other environmental pollutants.

The animal agriculture industry has described the pollution that emits from these lagoons as “naturally occurring” and “renewable.” But Phoenix describes these claims as “unequivocally false.”

Reduced emissions is an ‘illusion’

To contain these pollutants, factory farms install what they call a “digester” or a “tarp” to the lagoons. The farms then transfer any gas that doesn’t escape to a refinery. The methane is then sold off to the highest bidder to “offset emissions.”

ALDF executive director Stephen Wells told Plant Based News that factory farms are given green energy “credits” for capturing and transferring unregulated methane to a different location for combustion.

He explained: “Factory farms are then selling the “credits” to regulated industries and profiting from the very same pollution they intentionally created when they chose to use the cheapest and most environmentally harmful manure management system possible.”

Wells went on to explain that this creates an “illusion” of reduced emissions by the regulated industry (often the transportation sector) because it purchased faulty “credits” from these farms.

‘Factory farming is not sustainable’

“As if the worst polluting unregulated industry can offset another polluting industry,” Phoenix states in a new video with ALDF.

“And while they sell methane for profit, animal agriculture would like tax-payers to fund this ridiculous infrastructure, incentivizing more factory farms and more sh*t. F*ck that.”

“Factory farming is not naturally occurring, it is not renewable, and it is not sustainable. We need to be going in the other direction.”

Animal agriculture is catastrophic for the environment. It produces at least 14.5 percent of all greenhouse gas emissions worldwide. That’s more than all the world’s transport combined.

It’s also responsible for up to 91 percent of Amazon deforestation. Plus it’s a leading cause of water pollution and biodiversity loss.

ALDF produced the new video in response to increasing state and federal support for the production of biogas.

Grants, tax credits, and other subsidies given to the industry are incentivizing larger farms with thousands of animals.

“The industrial animal agriculture industry is already subsidized to the detriment of animals and taxpayers alike,” says Wells. “We need to be eliminating subsidies, not additionally allowing animal agriculture to profit from its own pollution.”

There are currently around 250 methane digesters on factory farms, and Wells says that the potential for growth is “exponential.”

Has the mainstream media picked this story up?

IPCC joins several other studies that agree a transition to a plant based diet will be “critical” to keeping our planet from warming 1.5 degrees.

It might also help to reduce the chances of novel deadly zoonotic diseases.

It’s absolutely catastrophic that California is boosting the animal ag sector by promoting biogas. 47% of our state’s water goes to meat and dairy operations – California, not Wisconsin, is the largest dairy-producing state. It’s practically criminal that our government is actually promoting these meg-operations when we’re in a megadrought. As noted in the article, animal agriculture is responsible for 91% of the deforestation in the Amazon; the leading cause of biodiversity loss; and so many other ills not mentioned here – ocean dead zones from agricultural runoff, pollution of land, air and water, preventable human diseases such as heart disease, pandemics, and more. Time to stop subsidizing and promoting animal ag. We need to shift to a plant-based food system.

We need people like him to spread the word all over the World that what we are doing is not sustainable for very much longer before it is too late to go back. All animals have a place on Earth, some are carnivores but humans are not and the carnivores do not breed billions of animals each year for unnecessary consumption. I am an animal LOVER and not just a PET owner and all life from a spider to a whale is important for the survival of Mother Earth.

Addressing #GlobalFoodProduction will be critical to the success of @Cop27P it must be on #COP27 official agenda!
The Lancet says that we can feed 10B people a healthy diet within IPCC goals. 🔗eatforum.org/eat-lancet-commission/ 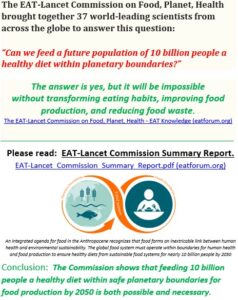 wpDiscuz
6
0
Would love your thoughts, please comment.x
()
x
| Reply
You are going to send email to