The product, which the company described as “revolutionary,” is “designed to deliver the juicy, tender and delicious bite of sliced steak tips.”

The steak features 21 grams of protein per serving and will initially be launched in Walmart and Kroger stores across the US.

“Beyond Steak is a highly-anticipated expansion of our popular beef platform and we’re proud to introduce this innovative product to consumers nationwide,” said Dariush Ajami, Chief Innovation Officer, Beyond Meat. “Beyond Steak delivers the taste and texture of slices steak in a way that is better for both people and the planet.”

Beyond Meat, which was established in 2009, has a large portfolio of meat alternatives. It sells vegan versions of mince, sausages, burgers, and meatballs, all of which are hugely popular among vegans, vegetarians, and flexitarians.

Plant-based food in the US

The launch comes amid a difficult few weeks for Beyond Meat, which has had some well-publicized financial issues.

Earlier this month, it was reported that the company had laid off staff after a fall in sales of its products. According to the Guardian, its stocks have dropped 70 percent over the last 12 months.

But that isn’t to say vegan food is falling out of favor. In the US alone, the plant-based food market is worth around $7.4 billion. Plant-based food sales grew three times faster than total food sales in the country, and dollar sales of these products grew by 54 percent.

It is likely that this rise can be partly attributed to the rising popularity of veganism. It is thought that around six percent of US consumers are vegan, and there are around 9.7 million vegan Americans.

In addition to this, research found that around 39 percent of Americans claimed that, while they did not eat a fully plant-based diet, they aimed to eliminate animal products as much as possible. For some, this is due to environmental reasons.

Animal agriculture is responsible for at least 14.5 percent of greenhouse gas emissions.

This figure is disputed by some studies, however, with many experts predicting it’s much higher.

Livestock farming is also a leading cause of deforestation, biodiversity loss, and resource depletion.

Although I am appreciative of Beyond for broadening the market for plant-based foods, calling this item a “steak” is a stretch. These are just pieces of meat. It is entirely possible to create a steak using just plant-based ingredients; in fact, my company, Plantagusto Group Ltd., created a steak entirely composed of plants using nearly the same ingredients as Beyond’s “steak.” Let’s ask folks which type of steak they like when they sit down to a steak meal. Something that resembles a steak in its natural state or something that resembles stewed meat?

At Plantagusto, we don’t settle for a product that is only an approximation of what it could be. Instead, we aim for what others might consider to be impossible. 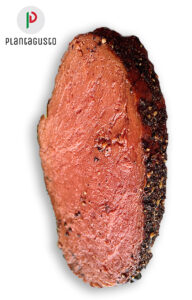