Jacques Robinson, from Aukland, was walking to his supermarket job at 4:00am one day in 2016 when he passed out. A car found him, unconscious and not breathing at the side of the road at 4:30am.

After being rushed to hospital, and hooked up to numerous monitors, he learned he’d had a seizure. This was the start of a painful and debilitating period, which would see Robinson having up to 10 seizures every single day for more than five months. He then started experiencing debilitating, which required hospitalization via ambulance.

Robinson told Plant Based News that he had around 70-80 hospital trips in his first year of being unwell alone. After three years of suffering, and taking around 30 medications a day just to survive, he hit rock bottom.

“Throughout this period I put on weight and peaked at my highest weight of 418lb (190kgs). I remember using food as an outlet during this time as well,” he said, adding that he’d ‘always been a bigger guy and overweight and it was something that gradually happened over the years’.

Working in a supermarket after leaving school meant food was readily available constantly – which he says ‘contributed hugely’ to his weight gain, adding that he ‘began to find a sense of comfort in food’. After leaving school at 308lb (140kg), he reached 352lb (160kg) within a year, eventually gaining another 66lb (30kg).

“At my heaviest, I had a smile on the outside but I was a broken-down, hurting soul on this inside,” Robinson told PBN. “I feel like I had lived through hell for the past three years. My energy was so low, some days I couldn’t get out of bed and struggled to even open my eyes. I lived with this constant fear of having a seizure that leaving the house I always had in the back of my mind the question ‘am I going to make it home today?’.”

His mental health was impacted, and he found himself feeling that he had no future, and wishing he was dead. “Deep down I felt ashamed to be in the body that I was in,” Robinson admitted. “I avoided social gathering and kept to my own bubble most of the time. It was a really hard point in my life. I just kept thinking how I was going to spend the rest of my life a total mess and die by 30.”

Despite numerous tests, doctors were unable to pinpoint the reason for Robinson’s seizures. One day, a close relative suggested that being overweight could be exacerbating his health issues.

Robinson said: “I never thought of this as any more than a passing comment, however months – possibly a year – later, at the start of 2019, I woke up one morning and I decided that enough was enough and I made an oath to myself that I needed to get healthy if I wanted to live past 30.

“I had had enough of the life I was living and I couldn’t take it any longer. I thought to myself that there is only so much that one person or a hospital can do, only you have the control to make a change. So I did. I started walking on my treadmill at home at 6am every morning and I’d walk till 7. I did this for a month and I began to feel good.”

Robinson, who initially set himself a weight loss target of 88lb (40kg), says that he started feeling better than he had in years. He added another walk to his daily routine and started to change his diet. At this point, he focused on fruit, vegetables, and lean meats – hitting his initial target weight.

At this point, he felt comfortable enough to join a gym. He started going every morning and doing cardio workouts before eventually picking up the courage to hire a personal trainer. This would be a significant choice: his trainer recommended a plant-based diet. After some research, Robinson decided to embark on this journey, starting with a 90 percent plant-based approach.

“I have never looked back,” Robinson revealed. “My body has thanked me so much for making this lifestyle change. I eat food that I know will fuel my body. I lived most of my life on a high meat/dairy diet. Switching to a plant-based lifestyle made me realize how good I could feel. I noticed significant changes to my body, physically and mentally too.

“When I started my journey I had no one to look to for inspiration or motivation. I didn’t have anyone to walk beside me or take me through what I needed to do. I felt alone. It wasn’t until I got my personal trainer that I became apart of this community who do motivate me to keep going and who I look to for support and inspiration.”

He added that he no longer suffers from the seizures and debilitating headaches.

Robinson, who now works out five to six days a week and walks daily, says he is sharing his story to give others hope, and to motivate them to help themselves.

He said: “I am sharing my journey because I had no one to look to for motivation or help and I never want anyone to be in the position of feeling alone and terrified of the road ahead like I was in. When you have a lot of weight to lose it is daunting.

“I can now say to myself that I am the living proof that through lifestyle changes, hard work, dedication, and a willingness to change that reverting your health is possible and it lies in our own hands, but there are people here to help you along the way.”

When it comes to advice, he says he recommends ‘just starting’, and finding a support network, whether that is ‘a friend, a group, social media, reaching out to someone like me’. Thirdly, he said, make some goals. Small ones that you can accomplish easily and some big ones that will take all the small ones to complete.

Some of his highs along the way include losing 209lb (95kg), ditching his medication, being able to shop in high street stores, and being able to sit in a chair freely and not have the thought of the chair breaking run through his mind.

You can do it too

Robinson concluded: “I truly believe that I have lived through this for such an important reason and that is to inspire, educate, and share my story to give people hope and motivation on a relatable level,” said Robinson.

“I am so passionate about people’s health and I think a story like this at this particular time could be so uplifting. If people see a normal person being able to do this, they may realize they can do it too.”

Jacques Robinson is now working towards becoming a personal trainer and nutrition coach. He also plans to write a book sharing his favorite plant-based recipes. 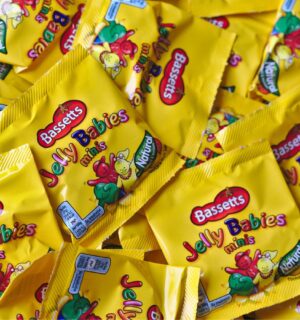 Food
Are Jelly Babies Vegan? What You Need To Know About The Sweets
17th November 2022
3 minutes to read
Podcasts