A prime-time BBC One presenter is hitting back at plant milks and claims they are ‘disastrous for the environment.

And rather, Adam Henson suggests, people should choose locally produced dairy instead and stray away from imported products ‘with a high environmental footprint’.

In the article, The Telegraph reports, he said: “If you’re drinking soya milk, that might have come from South America and caused deforestation, the destruction of species, the displacement of indigenous people.”

Moreover, both avocados and almond milk are ‘disastrous for the environment’, he asserts. As a result, people concerned about the environment should choose cow’s milk instead, he added.

Farmers are ‘doing a lot’ to fight climate change

He also said on local farms, cows are ‘wonderfully looked after and the family contributes to the local society and economy’.

The 50-year-old is also a farmer and stuck up for the industry, saying it’s ‘doing a lot’ in regards to climate change.

‘It’s about understanding where your food comes from. And, making informed choices, not having a knee-jerk reaction because you’ve read something on social media’, he adds.

And, it is the meat industry that is fuelling deforestation, according to reports.

For example, around 80 percent of global soy production is used as feed for livestock.

This is especially to produce beef, chicken, and dairy. According to WWF, this is driving deforestation, especially in the Amazon Rainforest.

It comes as it was revealed this week that the Amazon is emitting more CO2 than it absorbs, with catastrophic consequences for the planet.

The BBC presenter clearly didn’t do any research at all. Even Wikipedia has this on its soy milk page:

The cultivation of soybeans in South America is a cause of deforestation (specifically in the Amazon rainforest) and a range of other large-scale environmental harm. However, the majority of soybean cultivation worldwide, especially in South America where cattle farming is widespread, is intended for livestock fodder rather than soy milk production.

You are perfectly correct in your facts and figures, however Henson doesn’t farm in the Amazon, and he’s talking about dairy not meat, so whats that got to do with local dairy?
All commercially produced plant milks are deeply damaging to the environment, and looking well into the future are totally unsustainable ( carbon release, nitrous oxide, pesticides, herbicides, fungicides, soil erosion,pollution of water ways and costal ecosystems, deforestation and much much more ). By comparison local dairy farming ( particularly organic with controlled grazing ) is relatively benign. 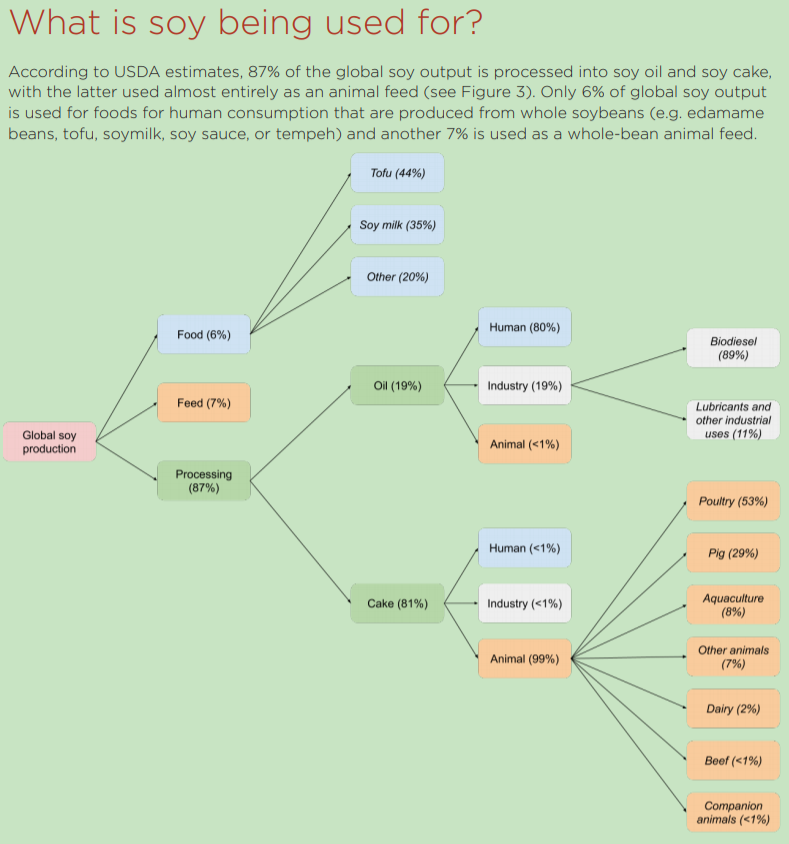 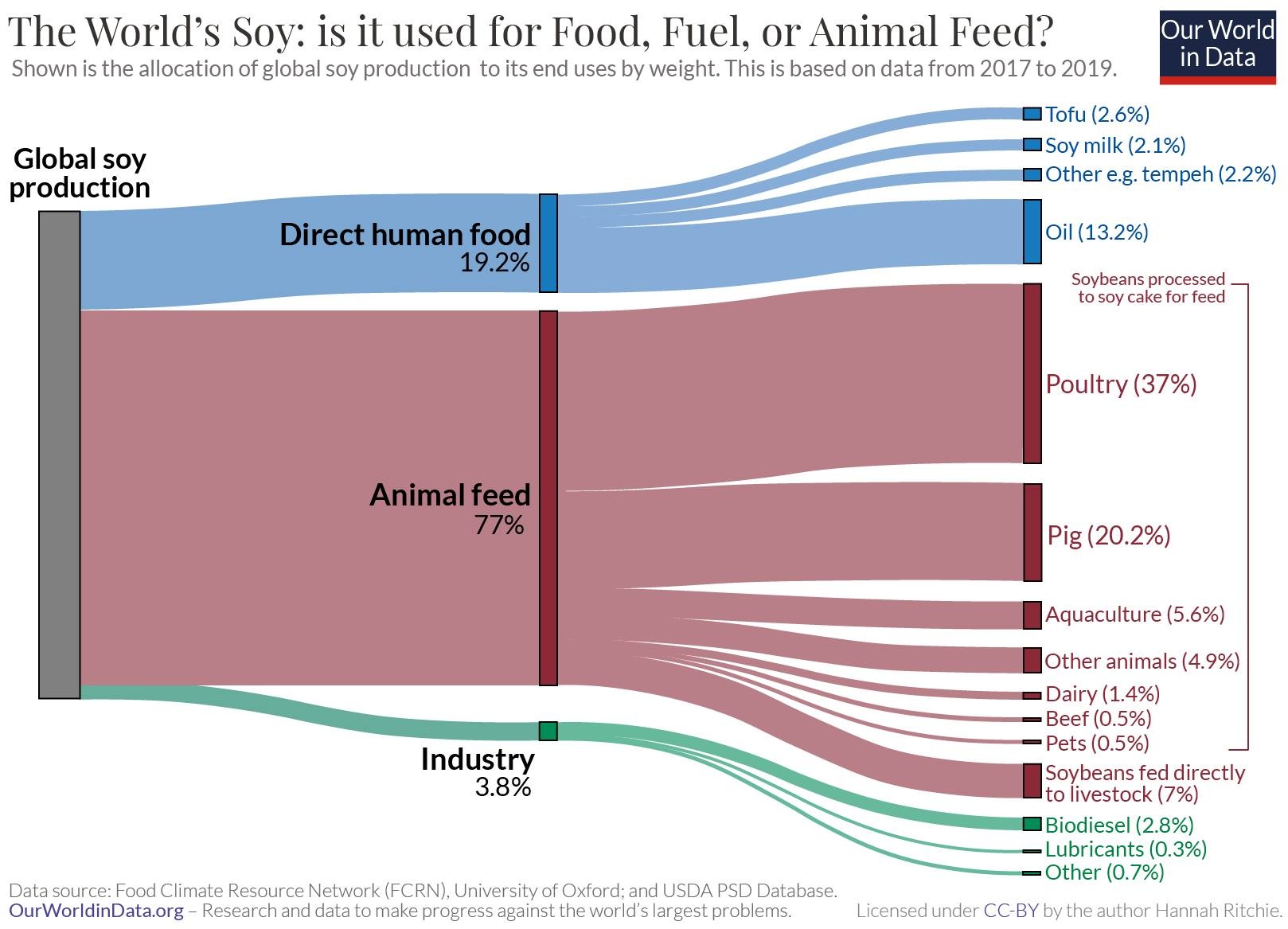 TL;DR – Most soyabeans in the world are genetically modified and used to feed animals. If you buy Alpro products then you automatically avoid GM and consume soyabeans not grown in the Amazon.

Labelling is mandatory within the EU for all food and feed products consisting of, containing, or obtained from GM plants when this is above 0.9% of that ingredient.

Genetically modified crops are very often used for animal feed as animal derived products such as meat, eggs or milk do not have to be labelled.

About two thirds of all protein-based animal feed in the EU comes from soy, of which about 70% is imported, and over 90% of that is produced from GM soybeans.

Meat, milk and eggs from animals fed with GM crops is eaten in many countries including the UK. In the UK, meat, milk or eggs labelled as organic will be from animals that have been fed non-GM feed.

Of the UK supermarkets, only Waitrose commits to ensuring non-GM feed is used to produce its eggs, chicken, turkey, farmed fish and New Zealand lamb.

Alpro products do not contain any GMOs.

Alpro is the dominant player in their market segments with 43% market penetration.

IN 2017 Alpro grow about 60% their soyabeans in Germany and France, within 50km of their Issenheim factory. The other 40% was imported from Canada.

Soymeal, a by-product of the soybean oil industry, is a case in point. In oil extraction, soybeans yield 18 to 19 percent oil and 73 to 74 percent meal; the rest is waste. Only a small portion of the harvested beans is directly fed to animals (about 3 percent globally). However, more than 97 percent of the soymeal produced globally is fed to livestock.

Eight countries provide 97 percent of world production; the top three countries (Argentina, Brazil and the United States), account for 39 percent, 26 percent and 17 percent respectively. These three countries also achieved the highest absolute growth in production over the past four decades.

Although the soy oil industry was initially the main driver of soybean production, feed demand is currently driving the expansion. Indeed, soymeal accounted for about two-thirds of the value of soybeans in recent years, with oil
about one-third.

What the hell have soya beans got to do with grass fed dairy? 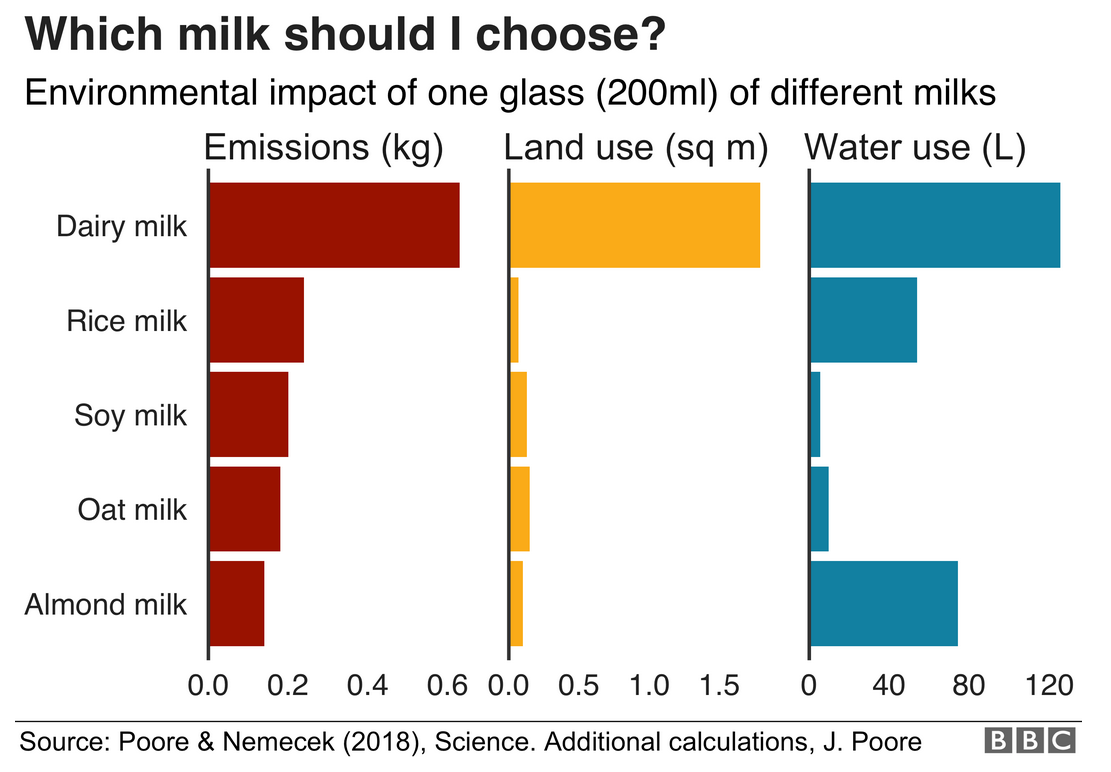 Worldwide figures consisting mostly of large commercial dairies. No relevance to small organic farms. Poore and Nemecek need to get up to date, put on a pair of boots and visit some local farms. Things are changing fast.

“while grazing of grass-fed animals can boost the sequestration of carbon in some locally specific circumstances, that effect is time-limited, reversible, and at the global level, substantially outweighed by the greenhouse gas emissions they generate.”

“‘Ultimately, if high consuming individuals and countries want to do something positive for the climate, maintaining their current consumption levels but simply switching to grass-fed beef is not a solution. Eating less meat, of all types, is.”

Soy beans eat grass when they do not attack indigenous people during dusk to dawn. You didn’t know?

Grass-fed dairy constitutes a minute amount of British milk. If you were to try to expand that industry to fit the needs of 65m people, you don’t have enough land for cows to graze.

Grass fed in the summer you mean? No nutrients in grass in the winter and inside all of them come. The dairy industry IS the meat industry. As soon as the cows slow up producing milk off they go at a young age to slaughter for meat. Dairy is a shockingly cruel industry where they remove the calves from their mothers causing huge distress. Most of the males are killed . These cruel industries need to be stopped.

You are right. Most meat industry is cruel. Slaughtering is brutal. No two ways about it.

Animal agriculture responsible for 90% of GHGs ? Unless you can get your facts right, don’t write the article!

The 90% may be a reference to a recent paper arguing that the cumulative effect of animal ag through 8000 years of deforestation amounts to 87% of annual emissions. https://climatehealers.org/the-science/animal-agriculture-position-paper/

Until the industrial revolution the greater part of deforestation was due to Arable Agriculture. Ice cores from the Antarctic show no rise in atmospheric carbon until the early 1800s ( Industrial Revolution ). The contribution to GHGs from Animal Ag has increased dramatically since WW2 along with world population and greater affluence. The current official figures from the IPCC state that 26% of GHGs comes from all agriculture, 14.5% comes from Animal Ag. Most of this is produced by “CAFOs and non regenerative grazing methods, most small farms contribute little too this, and in some cases not at all. The bulk of GHGs still comes from “industrial carbon”. The assertion that 90% comes from Animal Ag is tantamount to FANTASY.

PS. I don’t support Industrial Agriculture of any kind.

Rowland, there is not necessarily connection between co2, greenhouse gases and climate change.

It is still widely accepted that the human caused removal of 51% of the worlds tree cover/forest is a more powerful contributor to global warming and that co2 measures are merely an indicator of the oxygen consumer/producer equilibrium. As many such balances are (indicators) in so many other complex biological and chemical processes (within closed spheres such as Earth)

Which are the facts? Instead of criticizing you should produce those facts that you have. And not as fact tennis.

I have seen that 30% of green house gases are caused by the food industry. That is supposed to be, both the individual emissions from the animals and the industry.

Ive also seen another place that 63% of the body weight of meat walking on earth is from domestic animals. 34% is humans, and 3% are wild animals.

Either he is paid off by the milk factories or he is an idiot. There is no third option.
#GoVegan #GoVeganForTheAnimals #GoVeganForThePlanet #Switch4Good #DitchTheDairy #DairyIsCruel

Is there any way to use your platform to petition the BBC to be more responsible in what gets reported? This BBC report is very misleading and is obviously biased, and quite damaging in itself!

Hi Emily Baker. You need to revise your article and rather than just counter the BBC reporter and his quite flimsy arguments with your allegations you should stand up to be counted and bring forward the facts that you have.

Point is that many did not get that as the BBC reporter is himself a farmer (??) HE himself did not argue his case.

He may though have some points here and there in his void of nuanced view, and you need to counter it.

For instance. He truthfully argues that soy milk impacts the Amazonas. He’s right. But. How much of the soy milk comes from soy beans grown in Amazonas?

Get up and on your toes and be sharp and clear. Admit to where he is right as that is part of having integrity. And argue his case where he is using undue generalisation and also hit back where his obvious bias is coloured by his farming business.

I only consume locally grown and produced non GM Organic Soya milk in SW France. Prior to that I did consume locally produced dairy milk but my arthritis was crippling me and necessitated taking medications that were even less environmentally friendly!

The BBC needs to be more circumspect about who they allow to present on tv or write in newspapers.
Adam Henson obviously is uneducated about the actual facts, which are there for all to see. Of course he criticised plant based mills. He is a farmer….what more would you expect? He makes money by exploiting animals. He doesn’t keep animals on his farm for their sake. He sells their produce as well as their flesh. Animal agriculture causes unimaginable suffering to innocent defenceless animals, but dairy is the most cruel and ruthless of all. Cows are repeatedly impregnated, their calves are stolen from them, denying them the milk that their mother’s bodies made for them. The males are usually killed. The persecuted mothers are milked to death and when her output drops due to exhaustion, she is sent to the slaughter house. Thus the dairy industry is the meat industry. Henson is part of this misery but it makes money for him, so he is threatened by the rise of plant based milk and attempts to sway public opinion. I have visited his farm. There, the animals are viewed as commodities, as they are by all farmers. So you cant expect a balanced view from someone with a vested interest in the horrific animal agriculture industry.

Opinion
I Started Eating Meat To Fit In With White People

Culture
The Infamous Ringling Bros. Circus Is Back Again – This Time, Without Animals