Founder of the Veganuary initiative Matthew Glover is launching a vegan fried chick*n company – which aims to put ‘broiler farms out of business’.

The entrepreneur has partnered with renowned chef and restaurateur Adam Lyons to create the ‘bold’ and ‘edgy’ company, VFC.

“Among the vegan meals on offer was the best vegan fried chicken I had ever tasted,” said Glover.

Lyons later took part in Veganuary and then, with the idea of VFC taking shape, Glover took the chef inside a typical industrial chicken farm.

“Adam had never thought too closely about how chickens were reared before then, and that visit was a game-changer for him,” Glover said. “He went in as a fledgling vegan, and came out one hundred percent committed to getting VFC into the mainstream market.”

There is a rich seam of activism running right through VFC’s branding. The bold packaging features stylized graffiti and campaign messaging while the website hosts the men’s filmed visit to the chicken farm.

“I am a businessman turned activist,” explains Glover, “and VFC is very much a marriage of the two. There are many ways to dismantle unjust systems, and we intend VFC to be part of the movement that puts an end to factory farming for good.”

The pair has hired award-winning brand design consultancy Elmwood – the team behind Wicked Kitchen – and are ready to launch VFC ‘with fanfare’.

While they scale up, VFC will be available only online, but Glover and Lyons have appointed a sales director with the express aim of getting the products on to the high street as quickly as possible. Achieving price parity with animal-based chicken is another key priority, but they aim to eventually make it cheaper.

“We’re not messing about,” says Lyons. “We’ve developed a fantastic product that looks, cooks, and tastes like chicken, we’ve appointed an ambitious team, and we are ready to play our part in emptying those factory farm sheds. That’s what drives us on.”

VFC is made from wheat protein, and is soya- and nut-free. It is said to look, taste and ‘pull apart’ like chicken but is 100 percent plant-based. It is made for carnivores and suitable for vegans.

Defra UK Slaughter figures for JUST ONE MONTH in our small country. October 2020

Uk population 67 million in our small country. Work out the connection.

Most are so conditioned. Most are so programmed……MOST people eat animals and HAVE to believe that the livestock industry have vets, inspections, and government regulations that are adhered to……..well the WHOLE livestock industry lives a lie and MOST people who are involved OR buy the flesh in the supermarket, are party to a ruthless, brutal and callous business because they HAVE to believe this lie. Wilful Blindness

The livestock industry is PITILESS

The livestock industry is a pitiless, ruthless and abusive business; familiarity breeds contempt, complacency, callousness and cruelty to the animals – who are seen as a ‘crop’ to be ‘harvested’, a ‘product’ to sell. The livestock industry can’t even see it as merciless. They are TOTALLY blind to it.

You apply the same generalisation you accuse other of doing.
Every single chicken is badly treated. Every single chicken shouldn’t exist.
Everything is a lie. Pretty similar to any conspiracist nutjob out there. Everyione is lying, but yourself have to sole truth about everything. Everyone is wrong, except you.

You just claim words are meaningless if it goes against your religion. Animals die every single day. Why would I care more about the death of a chicken than the death of a mouse, a squirrel or a bird?

Its all about intention. If I kill someone intentionally for unnecessary purpose, that’s immoral. If I kill someone unintentionally, though still tragic, it is not immoral. And since there is no need to eat from animals, (fact- we can get all the nutrition we need to thrive elsewhere) the entire animal agriculture industry is immoral and evil. Why cause harm to others when you don’t have to?

But you kill for a necessary purpose, to eat!! Like every omnivorous animal do in the world. We are omnivorous, not vegetarians. You must respect yourself also.

Grain agriculture killed thousand of people each year because of pesticids.
Therefore, agriculture as a WHOLE is pitiless, ruthless and abusive. You see how ridiculous is your logic when you apply it differently?

Organic isn’t totally meaningless. It has to abide by certain criteria or it cannot be called organic. It also applies to grains, fruit and veg, not just meat

Stalin quote: `One death is a tragedy. A million deaths, a statistic.’

THIS is the odd disconnect with animal-eaters. So many will say ‘I love animals’ and ‘I’d never want animals to suffer’. So they buy into some illogical idea that the ones killed EVERY DAY for their ‘tasty’ meal don’t count. Wilful Blindness. Ignorance is bliss.

Or as William Wilberforce said about slavery, “You may choose to look the other way, but you can never again say that you did not know.”

‘the rantings of a handful of moralistic bigots’…….

I liken that quote to what so many claim we vegans are.

If I am a ‘moralistic bigot’ then so be it. Feel I’m in good company.

Look PBN – if you’re going to start showing pictures of animals in distress or in miserable physical condition on your food pages, then I’ll stop browsing your site. I can’t browse PETA’s site for the same reason. Your readers are already converted. There’s no need to cause shock and distress. If I read an article about vegan fried chicken, or anything else, I don’t want to be seeing pictures of animal suffering.

Thanks for your message. Our audience is made of many different types of people. We can not avoid showing the truth. It may be distressing and shocking to you, but think about what the animals have to endure. You are very welcome to stop browsing our website. But you will be missing out on lots of amazing vegan news.

This may be so, but at the very least, images of animals suffering could be confined to stories loosely connected with animal suffering. It should be possible to click on a story about vegan nuggets or whatever without confronting animal corpses.

It is important for people to know the truth, I agree. But there ought to be some sort of boundaries.

Unfortunately most people who eat meat see that chicken picture and don’t see suffering. Only the people who have made the connection do. It’s hard choices.

You’re probably right – in which case even less value to plaster images of animal suffering on otherwise light articles about new food products.

Top of the page *Contains images that may cause distress* and no images in the first screen’s worth.

Anyone not wishing to see distressing images can avoid. Hardened nuts can just plough on in!

If we did that, how many people do you think would avoid reading the article? 80% 90% I would say it could be closer to 98%. I appreciate you find these images distressing, but we can’t put warning signs on them. If we did this, the people that really need to see them, would avoid them. PBN does not write news for vegans, our audience is a broad church of 60% vegans and the rest a mix of meat eaters, fish eaters and many others.

I really do appreciate the idea, but these images are not anywhere near as bad as they could be.

We always try to choose the least horrific images where ever possible. We are not here to shock people in to quitting animal products, but to inspire them to make the change.

Appreciate the reply, Robbie. I’ve seen far worse and am one of the hard nuts I mentioned ? I always wondered about warnings but never really thought about it! Keep up the excellent work. ?

I know, I tried to make that point too. I agree that non-vegans need to be made aware. But there is also a time and a place. For me (a vegan) thsi is going to put me off using the site. And yes I know I am “very welcome to stop browsing our website” (as was pointed out to me), but unfortunately this will also apply to many other readers like me. My earlier suggestion was to try to compromise by restricting images of animal suffering to stories about animal suffering. So if you click on an article about a new vegan food product, you don’t have to see a disturbing image that sticks in your head for the rest of the day.

Next time that happens, I’m gone forever, which I know is no big loss for this site, but sadly I think other readers will be lost too.

Vegan fried “Chicken” , if you dont want to eat meat then why use the name “chicken” in your products ?
And stop trying to scaremonger people into veganism, by saying this rubbish is just as good and will save the planet. Nonsense and absolute stupidity along with carbon footprints etc, when do we all get told to stop breathing to reduce our personal carbon emissions. Blah blah blah environment global warming melting icecaps turtles eating plastic. Its the big companies who need to shape up not us little folks, a load of cobblers, wake up people have a “chicken” burger and enjoy life, its short enough as it is.

What scaremongering are you talking about? Big companies don’t care. That’s how we got into this state in the first place. It’s always the little people standing up for what’s right that starts a movement and before long, change happens. If people stop buying the products, the big companies will have nobody to sell them to and will make something else. It’s simple supply and demand. We are all complicit, we all contribute in some way. The more people choose compassionately with the animals, the Earth and our health in mind, the more the companies will follow suit. 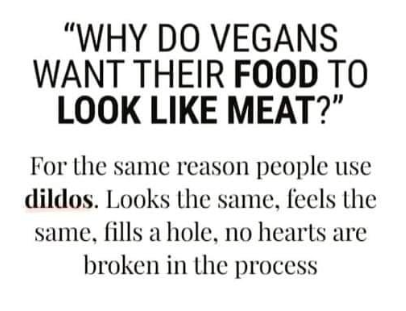 You’re just trolling, buddy. And I expect you self-describe as “big” for a reason.

Personally I feel this stuff is aimed mostly at meat eaters who would’ve normally eaten chicken who might be convinced to try this instead. Or people who want to be vegan but don’t know what to eat, making it easier for them (eat vegan chicken instead of actual chicken etc.)

I enjoy vegan meat alternatives occasionally as something different but prefer to stick to real food (tofu, lentils, rice/pasta/veggies etc)

This is great news. Maybe someday it will result in a fast food chain… I can only hope.

I can proudly say no more eating meat for me ever !!and the reason is because my body does not need and I dont want animals dying just to satisfy my appetite..this sad photos about animals in very bad condition reminds me why I never want to eat meat again and I’m proud of my self for not taking part in their suffering.

wpDiscuz
28
0
Would love your thoughts, please comment.x
()
x
| Reply
You are going to send email to